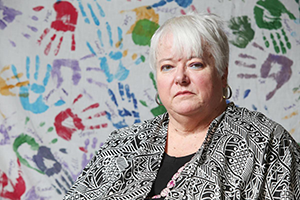 CIS’ters was set up in September 1995 by Gillian, a female survivor of childhood sexual abuse by a member of her immediate family. She had not disclosed her abuse as a child and broke her silence in her mid-40s, following another disclosure within the family. At that time there was very little awareness of the topic and more often than not many health professionals made errors when responding to victims. Gillian was able to access specialist counselling through her work role, and also for a short time accessed an NHS run survivor group. The former was a positive life changing experience, the latter set her off on a (still continuing) life-journey to improve statutory services for survivors.

In setting up CIS’ters, the aim was to make it feel safe and accessible and that the survivor could stay engaged with the service for as long as they felt they needed it.

CIS’ters has been made possible by the energy and passion of the women who not only joined CIS’ters, but joined with Gillian in the shared aim of promoting improved services, wherever they might be.

“Raising awareness is like meeting a range of mountains. As empowered women, we make up an ever-growing voice. We can share the task and encourage each other. Some of us will go over the mountain, some around it, all joining forces again on the other side. Individually the journey can feel endless, it can feel impossible – but together more of us will make it to the other side.”   Gillian, 2001

CIS’ters and Gillian are indebted to the women who have joined their voices within CIS’ters and around it. There are too many to mention here.

However, we would like to give Liz Batchelor a special mention. Liz met Gillian during 1995. Their shared experience of attending an NHS run survivor group began the out-of-group-discussion of ‘what would it be like to attend a survivor-led group’, with many of the other attendees joining in that process. This led to the birth of CIS’ters, set up by Gillian in September 1995 and which Liz joined shortly thereafter, becoming a key member of the team.

Sadly, Liz is no longer with us having passed away due to health complications arising from alcohol related coping strategies she developed as a child.  Countless women in the years since 1995, currently and in the future, will owe some part of their survival and decision to thrive because of other survivors like Liz. At a time when no-one was willing to listen, she spoke out – clearly and loudly – and is remembered.